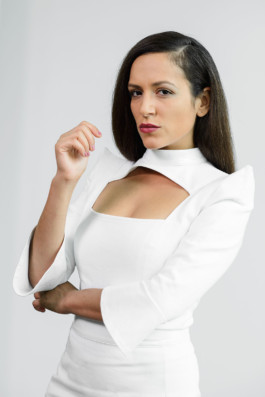 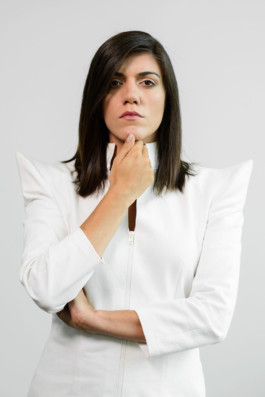 The project “Talking Straight Center” told the story of a Start Up built from a series of immersive multimedia performances which developed over the course of the one-and-a-half-year residency of the Talking Straight collective at the Maxim Gorki theater, culminating in a corporate entity founded with both political and scientific dimensions.

With Studio Я as an ‘incubator,’ the first project, “Talking Straight: Release” set down the parameters for the continuing simulation. Release was staged as a company launch and corporate origin myth. It was where the Talking Straight Center first presented itself to a public, in an event celebrating innovation and
themselves much in the vein of TED talks or apple product launches. The audience was staged as a group of sponsors who were to be thanked and informed about the state of the project and its future.

In conjunction with the federal elections of 2017, the simulation developed further. The Start Up transformed into a PR agency, that presented the concept for a successful party convention in a sales fair held in the Marmorsaal of the Palais am Festungsgraben. In this case, the audience was framed as members of different parties and potential clients, who attended the event as consumers. An image crisis in politics under which everyone was suffering, was described and promised to be solved with the tools the agency had on offer. The performance, titled “Talking Straight: The Convention” affirmed the project’s market oriented thought and language, but only at the risk of exposing their content less politics.

The last phase of the residency began in 2018. “Talking Straight Science Center” was founded as the simu- lation of a think tank offshoot of the company which purported to be researching the emotional distillate of a human Dasein in search of happiness. Hierarchy and Privilege were scientifically analyzed, as were the claims of a western secular society free of ritual and superstition.

In reference to the 7 days of the Genesis myth, seven multimedia performances were developed, which were based mutatis mutandis on the illusion of the science center. These included two laboratories.
“Talking Straigh: Swat” was a clinically sterile sweat lodge in a tent in the garden of the Maxim Gorki theater. “Talking Straight: D.N.A.” was an experimental dinner in the Lichtsaal of the Palais am Festungsgraben, for which the audience was asked to register as test subject by email.

All steps of the project’s development through the course of the residency were video documented with the aim of publishing a simulated documentary of the Talking Straight Center. The film “Talking Straight: Feature” premiered to a large audience in the Lichtsaal of the Palais am Festungsgraben.