Born in Ibiza / Spain, performer and author.
She studied acting in Berlin and received trainig from Fae Simpson at the Michael Howard Studio in New York.
As a performer she has been featured, among others, in Tracey Rose’s installation “The world is not fair”, which was part of the Weltausstellung 2012, a production from HAU and Raumlabor Berlin. Her collaborations have included work with the Russian collective Chto Delat? in the framework of Former West at the HKW Berlin, and the International Summer Festival at Kampnagel, Hamburg.
Agustín co-created the Talking Straight Collective, which was founded with the „Talking Straight Festival” at the Maxim Gorki Theatre’s Studio Я at the beginning of 2014. Many pieces were created in collective authorship since then, mostly immersive simulations which claim the normative status quo to be a catastrophe.
The „Talking Straight Festival” was invited to the Theatertreffen festival’s Stückemarkt in 2015 and performed in the entire house of the Berliner Festspiele for eight hours. Their piece „What a Wonderful Void“ was invited to the Sziget festival in Budapest.

From April 2017 to July 2018, Talking Straight were artists in residence at Studio Я of the Maxim Gorki Theatre Berlin and created the durational simulation “Talking Straight Center”.

In addition to her work in the Talking Straight Collective, she curated the performance programme for an exhibition entitled „Father Figures Are Hard To Find” at the nGbK in Berlin in 2016.
2018 she received the Work and Research Grant (Arbeits- und Recherche Stipendium) by the Berliner Senat for Culture and Europe, which enabled a research on the performativity of political disappointment comparing Catalonia, Cairo and Chemnitz.

The video work “ Die Sprache der Spekulation” (The language of speculation) was her first collaboration with the collective Guerilla Architects. This was shown within the exhibition “1989-2019: Politik des Raums im Neuen Berlin” at n.b.k. Berlin and curated by ARCH +. 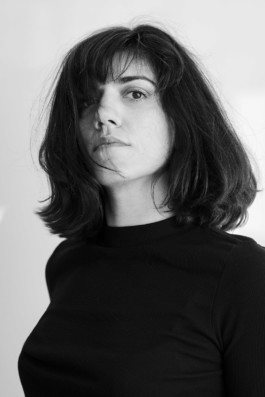 My performance practice as well as my writing aims to undermine a sense of identity, since no form of identification is full or stable in its intersection with others. My work orients awareness towards the way our emotions are taken up and formed within power structures, while simultaneously striving to understand power as a concrete process within which we are always implicated. As such, I am not interested in the finger-pointing of didactic political art. Rather I aim to stage a sober confrontation with the ways we are entangled in the processes of power and to develop performance formats which allows my audience to acknowledge their implication. In this respect, I believe humility is a subversive force. I want to reawaken a sense of awe in regards to the troubling human desire for admiration, explanations, geniuses, leaders and cults. A sense of awe that ultimately puts into question whether we have ever been secular anywhere. My work thus strives to re-orient our relationship to profane every-day rituals, without ascribing religious or liturgical power to them; allowing their emotional charge back in without setting them before us as a new set of dogmas.